You are here: Home > Things To Do > West Bay Beach 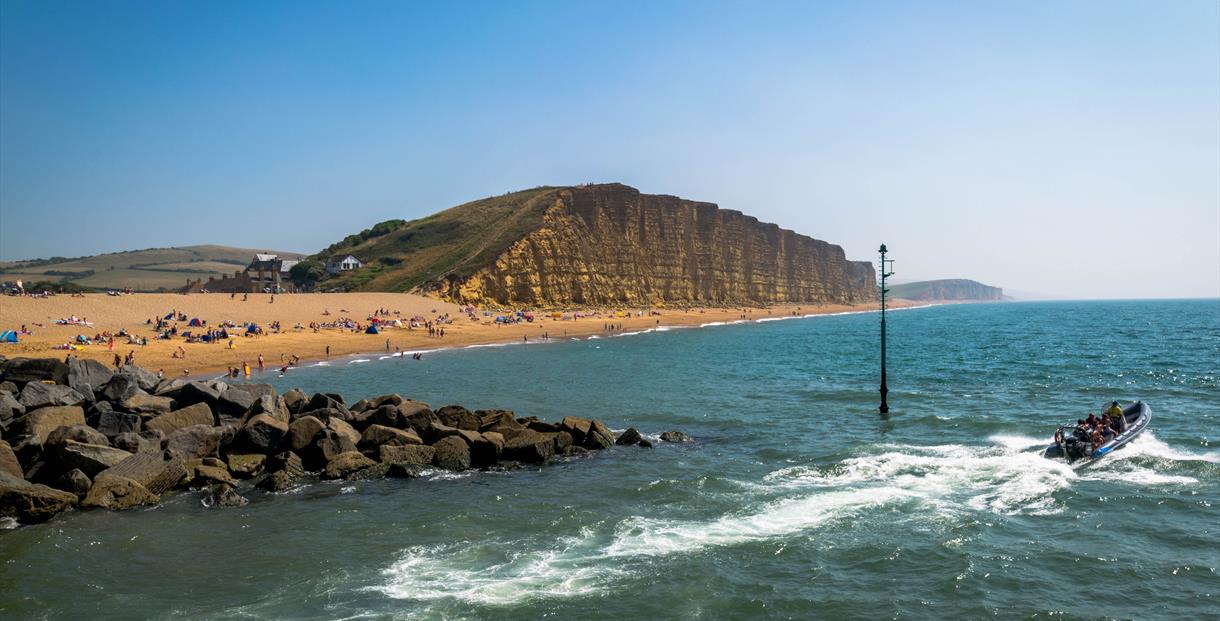 East Beach is a sloping, shingle beach backed by magnificent sandstone cliffs. The scenery is truly spectacular here, the golden cliffs rise 50m vertically above the beach and the views towards Chesil Beach and Portland will take your breath away. TV buffs will recognise this beach from ITV crime drama, Broadchurch.

West Beach is a smaller, quieter beach popular with young families, the protective cove formed between the harbour’s Jurassic Pier and the Esplanade’s rock armour groynes making it safe and shallow for paddling.

The Jurassic Pier, which is 240 metres long, was significantly improved in 2004. It has wheelchair access and plenty of seating. A restored 18th century cannon can be found on the pier.

There’s plenty to do at West Bay, take a stroll around the harbour for an ice cream or fish and chips, climb the coast path up to the top of the cliffs, hire a rowing boat up the River Brit or join a fishing trip out from the harbour, all the ingredients for a chilled out day on the coast.

In the summer, a lifeguard services watches over the waters of both beaches and there is an auxilary coastguard.

A trip down to West Bay beach is equally wonderful in the winter months; enjoy a blustery walk beach combing and fossil hunting and warm up with a nice hot mug of tea in one of West Bay’s many cafes. If you’re after hygge moments, you’ll find them here!

Please take care when visiting the beaches along the Jurassic Coast, never sit directly under the cliffs, take note of all safety signs and remember to take all rubbish home with you.

Safety: West Beach is often used for bathing. Bathing at East Beach can be dangerous as the beach shelves steeply and there is a strong undertow. Take care on the shoreline because sudden large waves can engulf persons at the water's edge. Please stay away from the base of the cliffs and do not climb the cliffs.

Lifeguarded: Lifeguard partrols at East Cliff Beach from 10 July to 5 September 2021 between 10am and 6pm.

Toilets: Toilets are located at the Visitor Centre, East Beach and at the south-western corner of the inner harbour, behind the Harbour Master's office on the Mound. Baby changing facilities provided.

Accessibility: Accessible toilets with Radar key are located at the Visitor Centre, East Beach and at the south-western corner of the inner harbour, behind the Harbour Master's office on the Mound. Ramps to some of the beach but no matting. Accessible picnic benches on the eastern Esplanade.

Parking: Parking available at the entrance of the village and behind East Beach.

Dogs: Dogs are welcome off lead between 1 October and 30 April on all beaches. Dogs are not allowed on East Beach (east of the Pier) or West Beach (west of the Pier) between 1 May and 30 September. There is an additional area of beach which is separated from West Beach by a large rock groyne - there are no restrictions on this beach. Dogs should be on lead at all times around the harbourside and on the esplanade.