You are here: Home > Things To Do > Old Harry Rocks 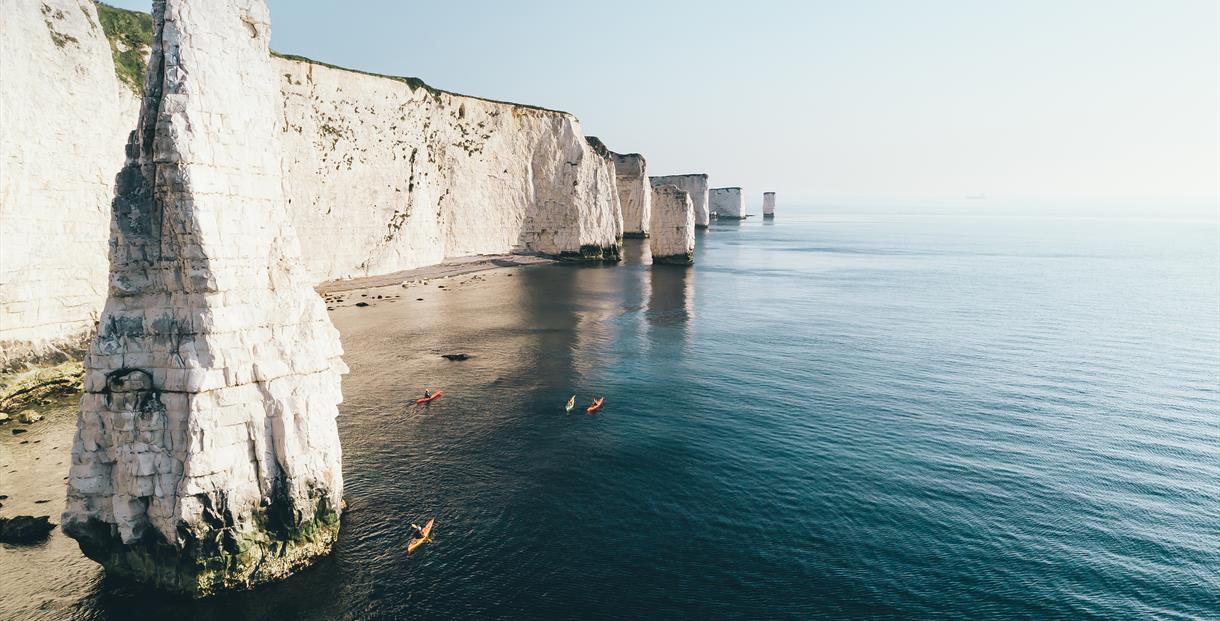 Standing tall on Handfast Point at the southern end of Studland Bay is one of the most famous landmarks on the South Coast – Old Harry. They are part of the Jurassic Coast World Heritage Site and are managed by the National Trust.

The chalk formations are popularly known as Old Harry Rocks, but the name Old Harry actually refers to the single stack of chalk standing furthest out to sea. Until 1896 there was another stack known as Old Harry’s Wife, but erosion caused her to tumble into the sea, leaving just a stump.

Thousands of years ago, Old Harry and The Needles (another chalk rock formation) on the Isle of Wight were linked by a line of chalk hills that eroded away during the last ice age. On a clear day you can see The Needles from Studland Bay.

There are a number of theories about where Old Harry got its name. It is reputedly named after either a famous local pirate (Harry Paye) or the devil. The top of the cliff nearby is known as Old Nick’s Ground which is another name for the devil.

The route leading to Old Harry is popular with both walkers and cyclists and is part of the South West Coast Path.

There are open grass areas to enjoy a picnic near Old Harry or there are a variety of places in Studland village for lunch or dinner or simply something to drink. Some have outside space to enjoy the summer sunshine and coastal views.

Dogs are welcome when visiting Old Harry, but because of the height of the cliffs, they must be kept on a lead.

You can hire a kayak or join a guided tour to get a closer look. City Cruises Poole run boat trips passing by the rock formations and along the Jurassic Coast between Poole Quay and Swanage Pier.

Old Harry Rocks and the nearby beaches at Studland are very popular and can be busy during the summer. There are buses running between Bournemouth, Sandbanks and Swanage all year which stop at Studland village, which is about 1.5 miles from Old Harry. The nearest car park is at South Beach and is run by the National Trust. It is a pay & display car park which is free for National Trust members.

From the west: the nearest mainline railway station is Wareham (on the London Waterloo to Weymouth line). Catch the number 40 bus from Wareham Railway Station to Swanage Bus/Railway Station. Then transfer to the number 50 bus to Studland.

From the east: Catch the train to Bournemouth Railway Station then transfer to the number 50 bus to Studland.