You are here: Home > Things To Do > Chesil Beach 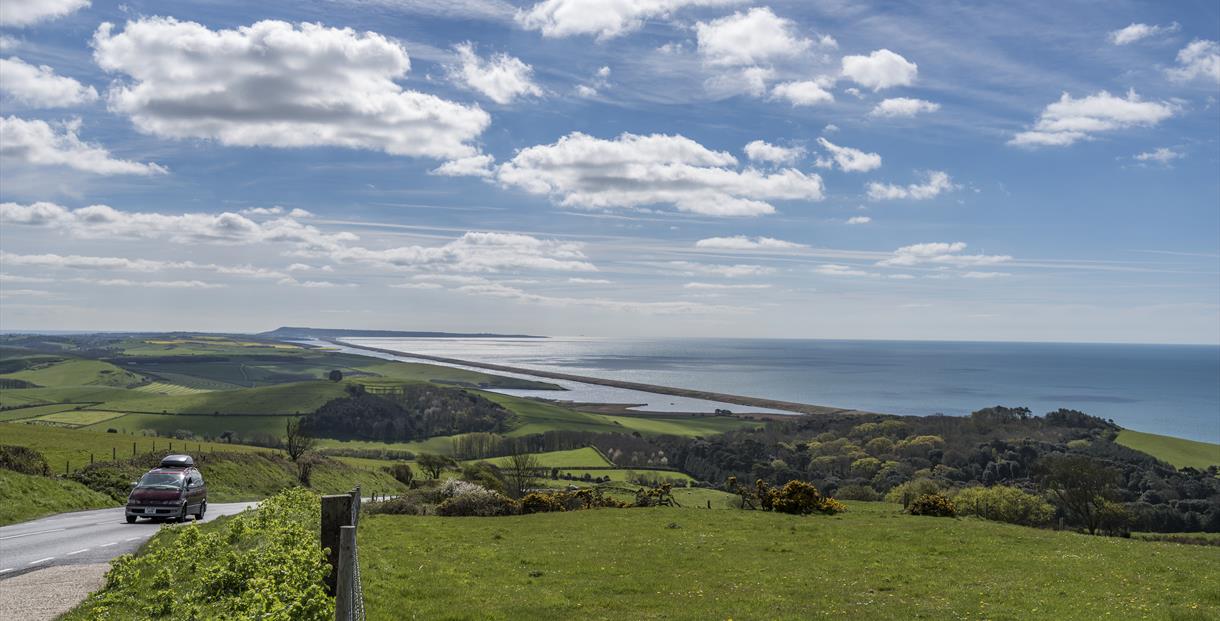 Chesil Beach is an 18-mile long shingle barrier beach stretching from West Bay to Portland and is one of Dorset’s most iconic landmarks.

Contrary to Weymouth’s golden sands, Chesil is not your typical British beach lined with stripy deckchairs and pastel painted beach-huts but wild, rugged and at the mercy of Mother Nature. Author, John Fowles, captures the landscape of Chesil perfectly in his famous quote: “It is above all an elemental place, made of sea, shingle and sky, its dominant sound always that of waves on moving stone: from the great surf and pounding … of sou’westers, to the delicate laps and back-gurgling of the rare dead calm….”

Forming part of the Jurassic Coast World Heritage Site, the sweeping, shingle ridge stretching for miles into the distance is a sight to behold, in fact, the view of Chesil Beach from the coast road above Abbotsbury has been voted by Country Life Magazine as Britain’s 3rd best view.

The pebbles on Chesil Beach are graded in size from potato-sized near Portland to pea-sized at Bridport and are made up of mainly flint and chert from the Cretaceous and Jurassic rocks, along with Bunter pebbles from Budleigh Salterton. It is believed that smugglers landing on the beach at night could could judge their position along the coast simply by picking up a handful of shingle.

Behind Chesil Beach lies a large saline lake known as the Fleet Lagoon, one of the few remaining undisturbed brackish lagoons left in the world.

The lagoon is home to the mute swan colony at Abbotsbury, the only place in the world where you can walk through a nesting colony and one of Dorset’s most popular tourist attractions.

Designated a SSSI, the Fleet Lagoon an important natural wildlife habitat for many species and is a top spot to see little egrets, dark bellier brent geese and common greenshanks. You can learn more about Chesil’s wildlife at the Chesil Beach Visitor Centre, where you can also enjoy refreshments at the Taste Café and book a trip on the Fleet Explorer.

The Fleet Explorer is a shallow drafted boat specifically designed and built to explore the lower reaches of the Fleet Lagoon.  The boat runs daily trips for visitors and is a great way to explore the area and experience one of the UK’s most important Marine Protected Areas.

As well as being a wildlife haven, the Fleet Lagoon is also famous for being one of the locations where the Bouncing Bomb (immortalised in the film The Dam Busters) was tested during World War II. You can still see evidence of Chesil’s defending role in the war in the shape of old anti-tank blocks and concrete pillbox remains.

Chesil Beach is a mecca for fishing and West Bexington is one of the most popular spots. Just offshore is a unique strip of unbroken sand that offers fantastic opportunities for catching mackerel. In the summer months the bank is dotted with anglers and their families, cooking their catch on the fire. It’s a beautiful sight.

Nature rules here, and the dramatic landscape has provided inspiration to many writers, the most well known being Ian McEwan’s who wrote ‘On Chesil Beach’, and J. Meade Falkner’s ‘Moonfleet’.

A visit to Chesil Beach should not be missed off your itinerary.

Safety: Swimming at Chesil Beach is not recommended. Bathing can be dangerous. There is a strong under-tow. Take care on the shoreline because sudden large waves can engulf persons at the water's edge.

Lifeguards: There are no lifeguards at Chesil Beach.

Toilets: Toilets are located at Chesil Visitor Centre, which are usually open 9am - 5pm.

Dogs: Dogs welcome all year but must be kept under control near nesting birds and mudflats.