You are here: What's On > Sweet Soul Music Sweet Soul Music Revue celebrates the enduring appeal of soul music. Matt Carter's funky soul band recreates the danceable grooves and hook-laden tunes of soul classics from the 60s and 70s. Fronted by Leigh Coleman, Phoebe Jane and Ashton Jones on vocals, the evening promises the blues of Etta James, the gospel of Aretha Franklin and the funk of Sam & Dave.

With its roots in blues, R&B and gospel, soul had its heyday in the 60s and 70s and is associated with legendary record labels such as Stax, Motown, Atlantic and Chess. It includes artists such as Otis Redding, Sam & Dave, Eddie Floyd, Carla Thomas, Booker T & the MGs and Isaac Hayes at Stax; Mary Wells, Marvin Gaye, The Four Tops, Gladys Knight,The Temptations, Smokey Robinson, Stevie Wonder and The Supremes at Motown; Ray Charles, Wilson Pickett, Aretha Franklin and Solomon Burke on Atlantic and Etta James and Chuck Berry at Chess. 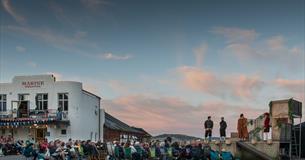 The Marine Theatre, West DorsetRight on the seafront in beautiful Lyme Regis, where you can see bands, films, comedians, plays and community-led events - or just admire the view of the Cobb and harbour.