You are here: Home > Things To Do > The Dinosaur Museum 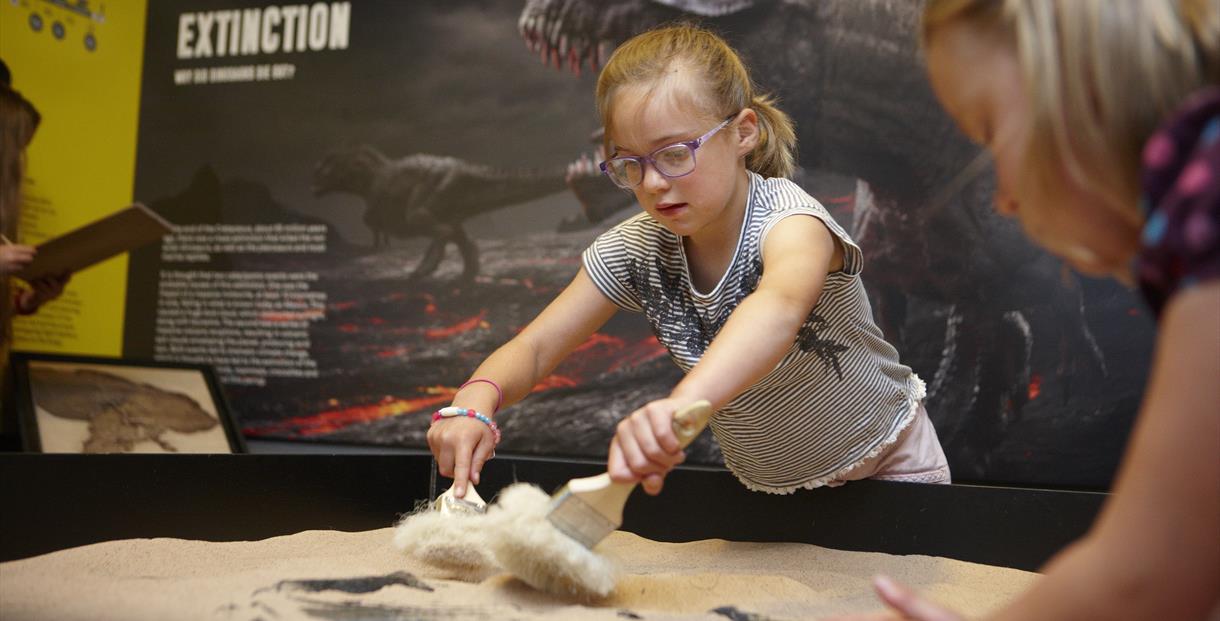 *Re-opening after Lockdown on Wednesday 19th May.

The award winning Dinosaur Museum is a treat, especially for kids. It’s unique devoted solely to dinosaurs with life-sized dinosaur reconstructions, skeletons and fossils creating a hands-on and interactive experience.

The incredible story of the dinosaurs and their fascinating prehistoric world millions of years ago is told. Life-size dinosaur reconstructions include Tyrannosaurus rex, Deinonychus and Triceratops and they beg to be touched by little hands - and that's encouraged!

The hands on displays make discovering about dinosaurs fun. They include the ‘Feely Box’ where you find out what it was like to touch a dinosaur – if you dare; ‘Dinosaurs and You’ where you compare yourself to a dinosaur; plus find out what a dinosaur smelt like with the new ‘Smell a Dinosaur’! Make your own dinosaur discoveries in the Dinosaur Excavation Pit! Take a walk on the prehistoric side in this award-winning museum - it’s packed with fun for kids.

In 1842 Sir Richard Owen invented the word “dinosauria” - meaning ‘terrible lizard’ - to describe this group of prehistoric monsters. Dinosaur fever was created and over 175 years later people’s imaginations are still being excited by these amazing prehistoric creatures. This sense of “dinomania” is reflected in The Dinosaur Museum.

Visitors encounter the fossilized skeletons, skulls and footprints of dinosaurs, marine reptiles, pterosaurs and other prehistoric creatures These include the Megalosaurus, the first dinosaur to be scientifically named, the theropod Allosaurus, Iguanodon and Hypsiliphodon. These are juxtaposed with fossils from pre-dinosaurian reptiles and prehistoric mammals such as mammoths and sabre-toothed tigers.

The Dinosaur Museum has been extensively featured on television including BBC’s Blue Peter, The Tweenies and Tickabilla. It has become nationally famous for its innovative, adventurous and friendly approach.

The Dinosaur Museum is situated in the centre of Dorchester, just 8 miles from Dorset’s world famous Jurassic Coast. It’s a great all weather attraction ideal for families.

Nearest major road is A35. Enter Dorchester and park in one of the town centre car parks. The Dinosaur Museum is pedestrian signposted and is only a short walk from the car parks.

Nearest stations are Dorchester South and West. Walk into centre of Dorchester following pedestrian signposts for museum. The railway stations are only about 15 minutes walk from the museum.