You are here: Things To Do > Golden Cap 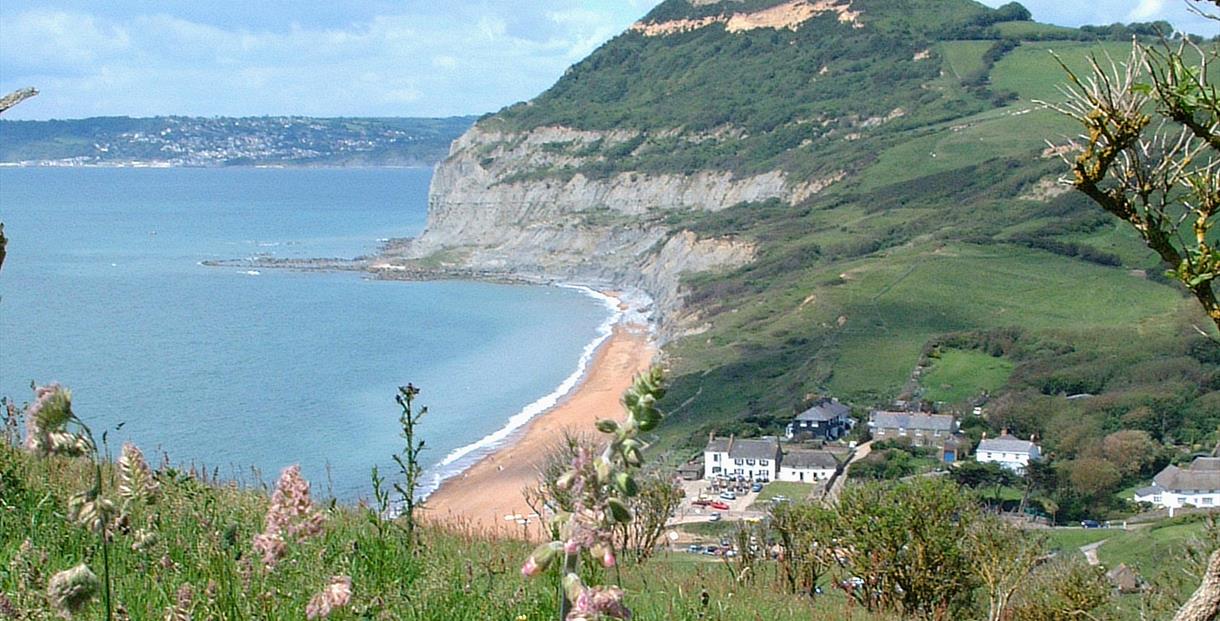 *LATEST UPDATE* The National Trust car parks at Golden Cap are now open. There are limited spaces, so if the car park is full please come back another time.

Golden Cap is a high, flat-topped hill of deep orange sandstone on the cliffs between Charmouth and Bridport, and is comprised of two ages of rock from the Jurassic and Cretaceous periods.  The Cap is the highest point on the south coast, at 627ft (191m), with views along the shore to the tip of Portland Bill in one direction and to Start Point in the other. Inland, you can see Pilsdon Pen and as far as Dartmoor.

Golden Cap is part of the National Trust Golden Cap estate and in botanical and wildlife terms, is one of the richest properties in the National Trust's portfolio.  On the very top of Golden Cap itself is a simple memorial to the Earl of Antrim, chairman of the Trust in the 1960s and 1970s. It was he who spearheaded its 1965 appeal campaign, named 'Enterprise Neptune', to purchase sections of unspoiled coastline before the developers moved in and it was all too late. Golden Cap was part of this and over the years the Trust has continued to buy up pockets of land all around, with the aim of preserving the traditional field pattern that exists in the area between Eype and Lyme Regis.

Today we tend to associate the National Trust with the upkeep of grand houses but, in fact, its first acquisition, way back in 1896, was a stretch of coast in Wales. Today the charity is one of Britain's biggest private landowners.

Its acquisition includes the ruined church of St Gabriel's (little more than a low shell with a porch to one side) and the neighbouring row of thatched cottages that have been smartly refurbished and are let out as visitor accommodation. They are all that remains of the fishing village of Stanton, sheltering in the valley behind the cliffs, which was largely abandoned after the coast road was rerouted inland in 1824.

Climbing towards the top, you pass from neat fields, through a line of wind-scoured oak trees, into an area of high heathland, walking up through bracken, heather, bilberry and blackberry, alive with songbirds. The loose undercliff on the seaward side creates a different habitat.

Golden Cap is comprised of two ages of rock from the Jurassic and Cretaceous periods. The base of the cliff is dark grey mudrock. The top of the cliff is made of superficially golden coloured sandstone called the Upper Greensand that formed in the Cretaceous Period about 100 million years ago. When fresh it is actually a striking green colour due to the presence of a marine clay mineral called glauconite, but when it is exposed to daylight and weathered glauconite turns a golden colour giving the headland its ‘golden cap'. The gap between these two rock types is called an unconformity and represents a break in the rock record caused by erosion. The very flat top of Golden Cap is actually a remnant of an ancient river terrace that formed after the Cretaceous. The gravely deposit was left behind by a river that was eroding the uplifted older rocks. Chert form the Upper Greensand can be found in the gravel, which bears testament to this time of erosion. This ancient river terrace can be traced inland forming the flat tops of hills to the north west of Golden Cap.

National Trust car parks at Langdon Hill and Stonebarrow Hill, both off the A35 between Bridport and Charmouth. Langdon Hill: From Bridport and the east, drive through Chideock village on the A35 and at the top of the steep hill, take the next left into the narrow, unmarked lane, then the first left along a recently resurfaced tarmac track up to the car park. From the west, go through Morecombelake and after passing Felicity's Farm Shop, take the first turn on the right onto an unmarked lane. Take the first left and follow the signposted track into the National Trust car park. Stonebarrow Hill: Located off the A35 between Lyme Regis and Bridport. From the west, go through Charmouth and take the turning on right by Stonebarrow Manor into Stonebarrow Lane to top of hill, over the cattle grid. From the east, turn off at Charmouth, go past Newlands Holiday Park and take next lane on left, as above. Other (not National Trust) car parks for access to the estate at Eype, Seatown, Charmouth and Lyme Regis.

By foot: Lies on the South West Coast Path. Access on foot from Charmouth, Morcombelake, Chideock, Seatown and Eype - all within a mile of the estate.

By bike: National Cycle Network route 2 runs along the whole English south coast and about 2 miles inland of the Golden Cap Estate. It is linked by small quiet lanes and bridleways.

By boat: There are pleasure boat trips along the coastline in the summer months from Lyme Regis and West Bay.