You are here: Food & Drink > The Bankes Arms 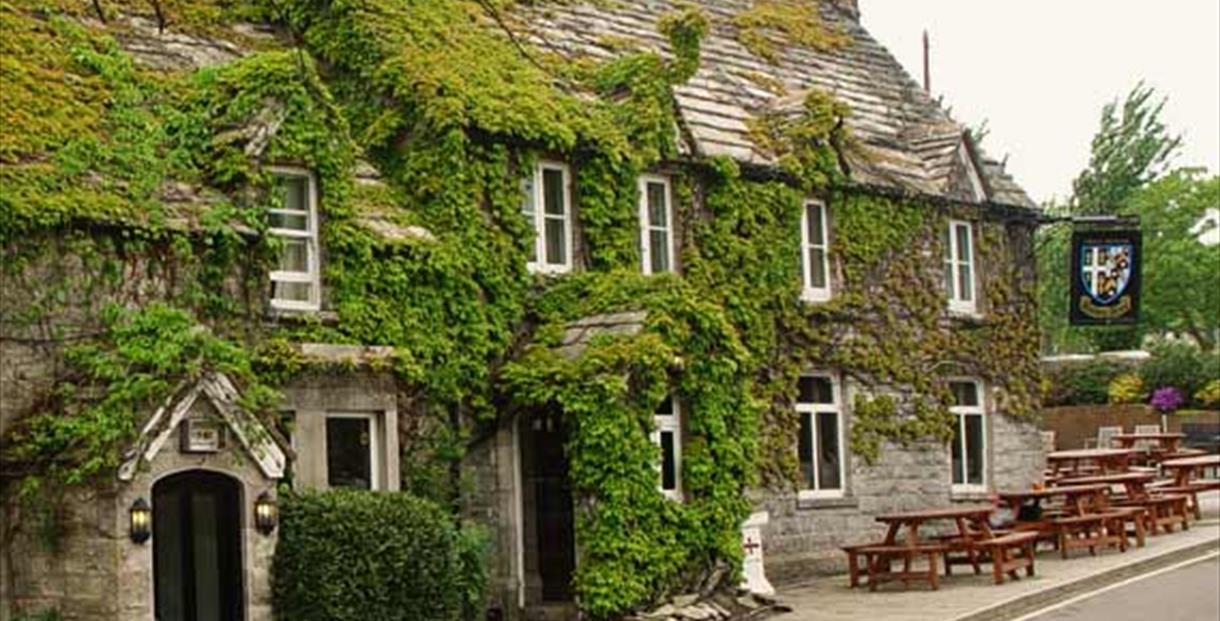 The Bankes Arms at Studland is an old smuggler’s haunt nestled in the Purbeck Hills, with fine views of the sea. The pub is minutes from the beach and nearby cliff top walks to the famous Old Harry Rocks.

The Isle of Purbeck Brewery is on the same plot as the Bankes Arms Studland and both are run by the same family. The pub not only serves the brewery’s five core beers as standard but also showcases its seasonal summer ales and winter porters as well as it’s very own cider.

There’s plenty of sitting room in the pub and if the weather allows there is also a large pub garden directly opposite the pub overlooking the sea. As well as the full range of alcoholic beverages the pub also has soft drinks, juices, children’s drinks and also serves a decent cup of tea or machine filtered coffee. So whether you’re enjoying an ice cold lager or a refreshing spritzer in the garden in summer or a sturdy pint of porter or a warming glass of red wine in front of the fire in winter, you can be sure that the Bankes Arms has a drink for you.

Hot, freshly-prepared food is served every day at the Bankes Arms Studland and our ever-changing menu reflects seasonal availability with mouth-watering salads, freshly caught fish in the spring and summer and casseroles, game and pies in the autumn and winter.

Wherever possible, produce is sourced from a wide variety of local Purbeck and Dorset suppliers so you can be sure your food is fresh and well nurtured as well as helping to sustain the local community. Seafish and seafood is caught and supplied by Dorset fishermen who safeguard existing stocks, meat comes from organic farms where the animal’s welfare is reflected in the quality of the meat and the game comes from well-run Purbeck estates.

All tastes and appetites are catered for, from simple bar snacks and pub favourites to gourmet dishes to accompany a bottle of wine. There is a children’s menu and high chairs and families are always welcome. Well-behaved dogs are also welcome anywhere in the pub which is ideal for those wanting to refuel after or before a walk along the Dorset Coastal Path.

There is a diverse range of wine to accompany your meal including some affordable fizz for those special occasions. There is also nine draught ales, including several brewed right next door in the Isle of Purbeck Brewery. In the summer,  ice-cold Pimms will be on the menu or, in the colder months, you can warm up with a hot mulled cider or wine.

From Swanage: drive along Shore Road (The seafront) and then onto Ulwell Road. Turn right onto Swanage Road (B3351) and drive into Studland Village. Turn right into School Lane (by the post office) then into Watery Lane and left into Manor Road. There is a pay and display car park next to the pub.

From Wareham: drive south on the A351 until you reach the ruins of Corfe Castle. Turn left under the bridge onto New Road (B3351) and follow this into Studland Village, then directions as above.

To get there by sea: Moorings are availiable opposite the Bankes. Please call for details.

FROM THE WEST: the nearest mainline railway station is Wareham (on the London Waterloo to Weymouth line). Catch the number 40 bus from Wareham Station to Swanage Bus/Train Station. Then switch to the number 50 bus to Studland village. From the Village walk along School Lane, then onto Watery Lane, then left onto Manor Road.

FROM THE EAST: Catch the train to Bournemouth then switch to bus number 50 to Studland village. From the Village wakl along School Lane, then onto Watery Lane, then left onto Manor Road.

JOURNEY PLANNING: Contact Traveline on 0871 200 2233 or visit their website: www.travelinesw.com to look up bus timetables. From 1st January 2019, calls cost 12p per minute plus your phone company's access charge.