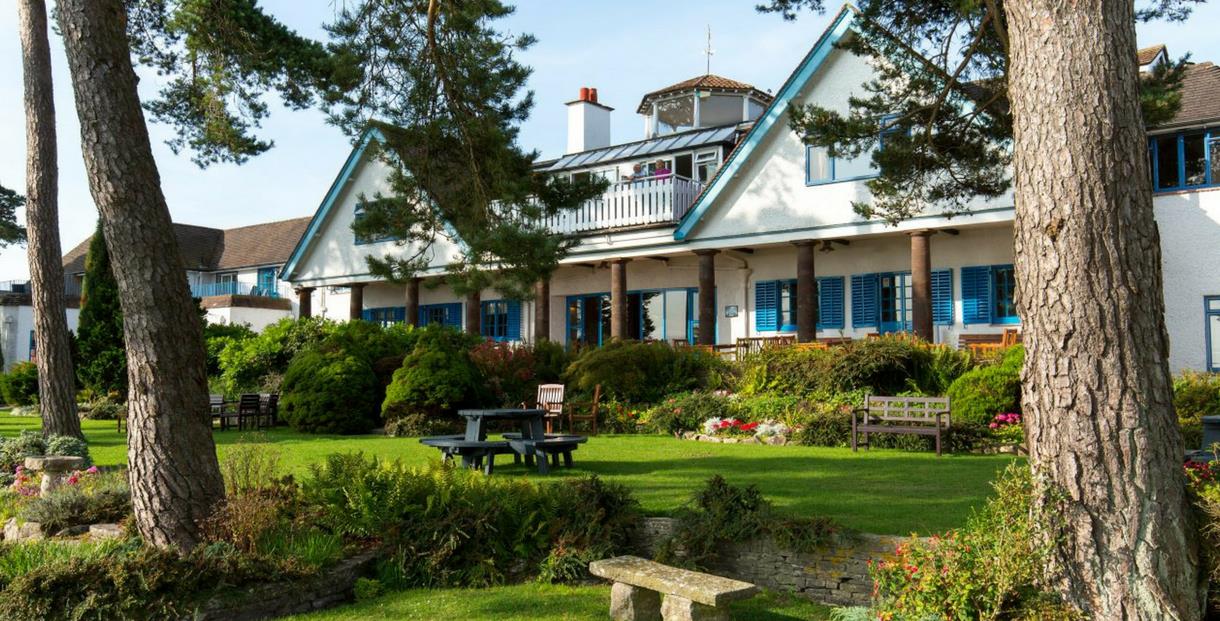 You’ll find us at Studland Bay on the Isle of Purbeck, between Poole and Old Harry Rocks. Purbeck is a quiet landscape of coast, cliffs, heath and woodland, and a haven for wildlife. It’s perfect for cycling and exploring, and a wonderful place for dog walking all year round. We’re a dog-friendly hotel, so you’re welcome to bring your canine companion with you.

While there’s plenty to see and do around the local area, we also have fantastic facilities on-site, so you can choose to relax in the way that suits you. Our golf course, tennis courts and indoor and outdoor heated swimming pools are there for you to use at your leisure. And what better way to wind down the day than with a soak in the hot tub, overlooking the downs?

As a family-friendly hotel, we also have things to keep the little ones entertained, including an adventure playground, a games room and a soft playroom for younger children.

Knoll House has a wonderful history too! Built as a summer residence for the aristocratic Bankes family in the early 1900s, Knoll House was first turned into a six-bedroom hotel by Chris and Poppy Smith in 1931. Shut during the war and used by troops preparing for the D-Day landings, the Ferguson family bought it in 1959 and it remained in their family until their retirement in 2017.

As the area’s most historic property, Knoll House has an impressive guest book. Sir Winston Churchill took tea at the hotel in April 1944 when he visited Studland to inspect sea defences along with King George VI and General Dwight D. Eisenhower. Hollywood screen siren Vivien Leigh, author Roald Dahl, and entrepreneur Sir Richard Branson are amongst the former guests.

Knoll House’s most famous resident was children's author Enid Blyton, who used it as her beach-view bolthole during the 1950s and 60s, staying for weeks at a time. It’s still possible to book room 40 which was her preferred accommodation and dine in her seat of choice at table three. Views from both provided inspiration for her Famous Five novels, while nearby Studland village was the basis for Noddy’s Toytown. The hotel also has a collection of original Noddy memorabilia dating back to the 1950s.

From Ferry take the B3351 to Studland Village.

From Bournemouth/Poole - A35 to Bakers Arms roundabout.  Take 1st exit onto A351, signpost Wareham.  Follow signs for Corfe Castle and Swanage.  When approaching Corfe Castle, turn left onto B3351 signpost Studland.

From Dorchester – A352 signpost Wareham.  At Worgret roundabout, take 3rd exit onto A351, signpost Corfe Castle and Swanage.  When approaching Corfe Castle, turn left onto  B3351 signpost Studland.

From the west: The nearest mainline railway station is Wareham (on the London Waterloo to Weymouth line). Catch the number 40 or bus from Wareham Railway Station to Swanage Bus/Railway Station (this bus route starts in Poole). Then transfer to the number 50 bus to Studland.

From the east: Catch the train to Bournemouth Railway Station then transfer to the number 50 bus to Studland. You can buy a combined train and bus ticket from any staffed South West Train station for this journey.

Journey planning: Contact Traveline on 0871 200 2233 or visit their website: www.travelinesw.com to look up bus timetables. From 1st January 2017, calls cost 12p per minute plus your phone company's access charge.